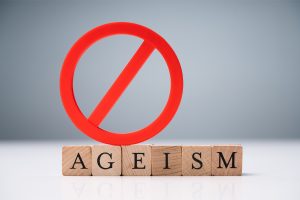 Have you ever suffered from ageist attitudes? And, if so, do you think it’s a problem that the country needs to address? By Tony Watts OBE

Many people think we are living in an increasingly compartmentalised society, with different groups living in, and separated by, their own communication bubbles and not connecting to others. But I’ve been writing about ageist attitudes for several decades now – it’s nothing new, believe me.

But is it getting better… or worse?

New research conducted by retirement community developers McCarthy Stone has unveiled the true scale of what it calls “Ageist Britain”, reporting that over a quarter (27%) of over 65s in the UK – equivalent to more than three million people – say they have been victims of ageism.

In addition, 60% of UK adults of all ages believe it’s a problem that needs fixing.

The findings are based on a poll of 5,000 adults and in-depth interviews with later life experts and older citizens. It highlights the scale of the ageism epidemic across the nation, proving it to be “one of the last bastions of ‘acceptable’ discrimination”.

Ageism, says the report, most commonly manifests itself in negative stereotypes and derogatory terminology such as ‘old fogey’ and ‘codger’ and is fuelling continued misrepresentation of older people within society. 43% of people under say they 65 fear they’ll be regarded as frail and somehow less important in older age – despite the fact that more than half (51%) of over 65s say they actually feel more confident and resilient in later life.

Some 41% say ageism results in dehumanisation of older people and a third (31%) believe it has a detrimental impact on mental health. More than half (52%) believe ageism creates a lack of awareness of older age groups’ wants and needs – a worrying consequence given our collective national responsibility to support the ageing population.

For those looking to remain in work in their 60s and 70s, ageist attitudes amongst employers could be damaging if they are deemed to be more dispensable than their younger cohorts.

Interestingly, almost half of Brits (43%) believe the government is the number one source for driving everyday ageism and negative perceptions of older people, and 44% of those aged 65 and over feel that as a result, government policies fall short in delivering what our older demographics need. Only 17% of respondents believe that older communities are given sufficient social care support.

The advertising, media and entertainment industries are also deemed guilty of pushing negative perceptions of ageing.

John Tonkiss, Chief Executive of McCarthy Stone, said: “Ageism dehumanizes our most vulnerable and perpetuates misrepresentation. The post-pandemic era presents the opportunity for us all to re-set and champion the needs and wellbeing of older people in society. We are calling on government and society to make positive changes to establish Britain as the best place in which to live and grow old.”

One of the potentially divisive issue is economic: the older generation is often portrayed as the one with the assets and the money, while younger people in “generation rent” are struggling to get onto the housing ladder.

What is the solution?

However, the research showed that more than two-fifths (42%) wanted to see additional funding for support programmes to help older people, with 36% of younger generations happy for this to be accommodated through extra taxation. Three-quarters (74%) – including more than two-thirds of younger generations – believe that older people deserve additional government benefits, such as TV and fuel allowances.

In my voluntary roles over the last decade and more, I (and many others) have been calling for dedicated representation in Westminster – an Older Person’s Minister or Commissioner for England who could make sure that the views and needs of a sizeable chunk of the population are taken into account when policies are decided. It’s a role that other UK nations have developed and works well, in the same way that ethnic groups, women and children have representation.

The way that the pandemic as handled – to me – smacked of ageism. The fact that thousands of care home residents were “thrown to the wolves” according to a Commons report by the Government is another example of this being a group that is apparently dispensable.

At a time when, quite rightly, there has been a sharper focus on the curse of systemic racism in society, it’s important to remember that inbuilt and uninformed prejudices negatively affect other groups too, and that it feels like we are currently becoming a society increasingly defined by our ‘differences’ rather than what makes us the same.

Let us have your views and experiences: Email