Will the lockdown permanently change the workplace for older personnel? 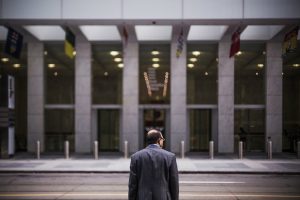 It goes without saying that the World has been a very different place during lockdown… but how much will the World of Work change for older workers when things return to “normal”?

If you’re someone in their 50s 60s or beyond, and still engaged in work, the last year or so may have proved problematic… but not (according to research) as difficult as for younger people.

In particular, working from home has been more readily embraced by older workers according to a number of research programmes, and this may well make itself felt when it’s deemed safe to return to the office.

New research from an employee engagement and culture app called “Totem” found that almost half (49 percent) of employees aged 18 to 24-year want to return to the office full time, compared to just 29 percent of those aged over 55. Indeed, two thirds (66 percent) of older workers would instead prefer, in the future, to go with “hybrid working” – spending part of each week working from home.

There are plenty of sound reasons for this. Younger workers are more dependent upon their colleagues for mentoring and on-the-job learning. They are often living in an accommodation which is smaller than that of their older counterparts, and often sharing the space available with flatmates, making it trickier to carve out a quiet space to work. A higher percentage of younger people have reported wellbeing problems, particularly around mental wellbeing.

Higher earners are also more in favour of spending at least part of their week working from home: almost half (47 percent) of those earning over £45,000 per year would prefer hybrid working, going up to 54 percent for those earning more than £125,000 per year.

What will this mean?

Prior to the lockdown, many employers were suspicious of remote working, but most of those fears have been assuaged: indeed, there have been several surveys showing that most of us actually put in a longer day when working from home.

The financial ramifications for employers are significant as being able to have more staff remote working enables them to reduce their office space requirements, and – indeed – the last year has seen a trend in that direction, slightly countered by a recognition that more dedicated “collaboration” space is needed in many work situations.

Being able to spend more time working from home could suit those with caring responsibilities, and a high percentage of older workers fall into this category, and so too those with mobility issues or disabilities. It also reduces the time (and cost) spent commuting each day.

Employees who have been working for the same employer for a minimum of 26 weeks have the right to ask their employer to work flexibly under the Flexible Working Regulations, although, when they submit their application, the employee has to set out what effect they think it would have on the business. Moreover, employers are entitled to refuse the request as long as they have properly considered it.

However, it’s fair to say that the case for flexible working has been well and truly demonstrated – and employers can benefit in lots of ways by accepting it as the way forward.