Inflation is back, but RetireEasy is here to help you plan for it. 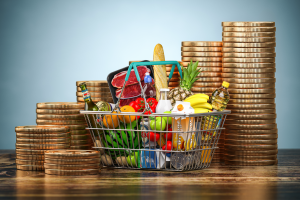 Inflation is on the rise, bringing with it major concerns for anyone planning their retirement finances. Here, Mark Soper ACII offers ways to help you factor the risks of continuing inflationary pressures into your plans.

RetireEasy’s LifePlans enable users to plan over 40 years of retirement and provide for an average annual inflation rate. But, as existing users know, there is a provision that allows you to plan for a limited period of high inflation. See below for more on this.

Over the last three decades, inflation has been one of the major variables within the economy that has caused the least concern – at least, when compared with the past. The last time inflation was at double digits was over 40 years ago, in 1981 – a time when I was just starting out in the world of work. And, as awful as 11.88% inflation sounds now, it was nothing compared to the 24.21% rise we hit in 1975. Tellingly, two big factors in that year’s painful rise were spiraling oil prices and wage inflation…

But now – for the first time in many people’s memories – we are heading into high inflationary territory again. A “perfect storm” of Covid, Brexit, wage inflation and worldwide price rises of key commodities was already brewing before Russia’s invasion of Ukraine sent energy prices stratospheric. The predicted 8% inflation we are expected to see in April may well keep on rising after that time as commodity prices work their way through the system.

The effects will be felt by everyone who doesn’t see their income keep pace: “UK household incomes facing biggest decline since mid-70s”, says thinktank Resolution Foundation, while the BBC warns that “the UK faces biggest income squeeze in nearly 50 years”.

So how much does all this matter for your retirement finances, especially as these will (on average) be accumulated over forty or more years and then drawn down over a further 20 or more, during which time “blips” can be ironed out? And how can you keep tabs on what the impact of a continuing period of inflation will do for your longer- term plans?

This is where it gets really interesting…

…or worrying, depending upon your perspective.

Today, the majority of retirees will normally use some level of invested assets – either inside or outside a pension plan – as a requirement to supplement any fixed income and provide for a desired level of lifestyle.

Over the last decade, for individuals in or approaching retirement, a lot of focus quite correctly has been placed on a sustainable rate of withdrawal versus the anticipated rate of return from the invested assets. Over this period, the emphasis on inflation risk has not figured as a major factor so much – partly because it has been persistently low for so many years and partly because, when it has reared its head, it has been considered transitory.

But recent events show us that the World can turn very quickly and with it factors that we have come to rely on in our financial planning may no longer be as robust and need to be reviewed quickly. Inflation is that key factor and in very simple terms it could be viewed as a direct tax on investment returns.

Once inflation takes hold, investments must work much harder to pay out the same rate of withdrawal, otherwise there is a real risk of significant erosion of the capital invested and potentially the risk of running out of money.

Increasing inflation has been on the lips of most investment analysts and commentators for the last six months as the world began to emerge from the worst clutches of the pandemic, and there have been solid arguments for and against inflation being a natural and transitory phenomenon as global economies recover from the pandemic with continuing supply chain issues and wage demands growing as a result of staff shortages across many industries.

Russia’s invasion of Ukraine has added huge uncertainty and complexity to economic and financial prospects that were already in the balance. With it comes the possibility of higher and longer lasting inflation which could weigh on global economic growth prospects that were anticipated at least for the rest of this year.

The big questions are:

How can LifePlan help?

Being a humble financial advisor rather than a global economics guru, I won’t attempt to answer either of those first two questions. And, if I’m honest, I suspect that some people who DO offer their opinions are simply putting a finger in the air when they do so.

But I can offer some guidance on the second two questions as they can, at least in part, be answered using the RetireEasy LifePlan software. LifePlan is a hugely flexible financial planning tool and one of its key features for our subscribers is its ability to project throughout lifetime the sustainability of investment funds given the level of withdrawal required.

Multiple scenarios can be programmed in our Premium version allowing individuals to visualize sustainability of investment funds where larger one-off or regular capital withdrawals may be required, for example, cash gifts to family members, replacement cars or care costs.

We allow subscribers to set their own best judgement of future inflation as an average over the coming years, and from that figure you can see how much you can safely afford to take out each year from retirement onwards before you start eating into your assets.

And if you want to play safe and assume a higher rate of inflation, then you can run that scenario through – and get an immediate picture of when (or if) your retirement finances might start coming under pressure. That might encourage you to be (for example) more cautious about gifting an inheritance in the near future or changing your plans to retire early. Equally, it might show that – even with a few years of high inflation – your plans are still looking secure and you can relax!

How about the short term?

This year we anticipate that most of us are going to feel their finances under strain as the cost of living – particularly fuel and energy costs – outstrips any increase in income we might see.

If you think that the current situation is a temporary blip, but think that it will make a dent in your future finances which you want to account for, you can factor in higher/transitorycosts under the “Future expenses” tab. That will allow you to keep an average inflation figure in there in line with past experience but still account for an expensive year or two.

Equally, you can run a few different scenarios that show what might happen if inflation continues at a high rate, or if the current pressures on the global economy put downward pressure on investment values… or even if you feel you need to take a short break from saving in order to shore up your short-term finances.

If you have not yet tried RetireEasy, or if your subscription has lapsed, why not find out what inflationary pressures might mean for your retirement finances?

What’s more, RetireEasy LifePlan Classic costs just £5.99 per month and LifePlan Premium just £7.99: there is no contract and you can cancel at any time.