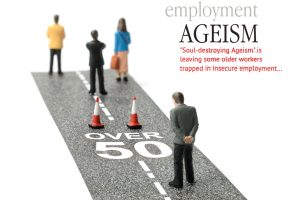 With new figures showing that the number of 50 to 64-year-olds out of work has climbed by 175,000 since the start of the pandemic, experts say ageism in recruitment could be the final straw which prevents many of this group ever returning to work.

A new report from the Centre for Ageing Better has concluded that “Soul-destroying Ageism” is leaving some older workers trapped in insecure employment, unable to find suitable jobs, or forced into early retirement.

The research, carried out by the National Institute of Economic and Social Research and Demos, found that 36% of people aged 50-69 say they think their age would put them at a disadvantage in applying for jobs – more than any other age group. Meanwhile 17% say they have experienced ageism directly, having been turned down for a job because of their age.

Nearly a third (29%) had been told they were unlikely to be successful going for a job role due to having too much experience.

Researchers found that age-related discrimination may be compounded by other forms of disadvantage. The study showed that people from Black and Minority Ethnic backgrounds were more likely to report recent age-based discrimination than those from White backgrounds (34% versus 18%).

The impact of ageism can be severe. Of those in their 50s and 60s who said they had experienced age discrimination (17%), a third (33%) felt stuck in insecure work, more than two thirds (68%) said it had affected their confidence, and 43% said it had affected their health and wellbeing. Around three quarters (76%) were put off applying for jobs, and a third (33%) were put off working altogether or went into early retirement.

This is particularly worrying in the current climate, with over 50s being hit hard by job losses during the pandemic and a second wave of redundancies among this group expected when the furlough scheme ends. Recent figures show that over 50s are twice as likely to fall into long-term unemployment once they lose their jobs, compared to younger workers.

Recent figures confirm that this group is amongst the hardest hit by the economic downturn. Over 50s are more likely to fall into long-term unemployment than younger age groups and experts warn many could fall out of the workforce for good.

Patrick Thomson, Senior Programme Manager at the Centre for Ageing Better, said: “These stark findings show just how accepted, widespread, and damaging ageism in the recruitment process can be. This goes far beyond being turned down for any one role. It has real impacts on people’s health, wellbeing and livelihoods. It leads to people losing confidence, retiring early, or being stuck in insecure work.

“Workers in their 50s, 60s and beyond have a vast array of skills, know-how and experience – but are all too often shut out by narrow views of their age.”