The age when ageism begins revealed… 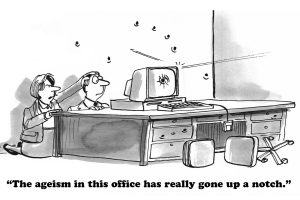 The average age at which we begin to feel “invisible” and that society is ignoring us is 57, according to a new study by SunLife.

In their “Retiring Ageism” Report, SunLife asked 2,000 people in their 50s, 60s, 70s and 80s if they feel their age is negatively affecting their lives.

Overall, 36% of respondents said they had felt either neglected or invisible – rising to 38% for women. More than one in three said they began feeling this way at 50, while one in seven cited 60… but the average age when “ageism” started affecting their lives was 57.

One of the major culprits for being made to feel this way, according to the survey, was the way older people are represented in the media. Nearly 4 in 5 (78%) of people aged 50+ said they hadn’t seen an accurate representation of their age bracket by companies or celebrity personalities within the past year. A mere 40% said they thought over 50s are represented well.

Retailers and advertisers are also at fault: over a third (36%) said brands don’t bother to advertise or market to people of their age, particularly the fashion and sports industries, while over half of those surveyed said they felt both sectors failed to represent their age well.

SunLife’s research found that two thirds (67%) said ageism causes them to feel underappreciated, let down (39%) and depressed or anxious (36%).

When it comes to employment, over a third (35%) said they have not applied for jobs they wanted because of their age.

Commenting on the findings, Claire Turner, Director of Evidence, Centre for Ageing Better said that: “Too many people are made to feel invisible because of their age. Ageism affects people at work, it affects people’s health, and it can affect the way they see themselves.”